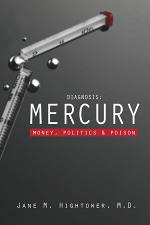 Mercury emissions from coal-fired power plants and other industrial sources wafted into the air, fell into the oceans, and accumulated in fish, concentrating as the heavy metal moved up the food chain. Humans who ate a lot of seafood were at risk for mercury poisoning.

Logically, Hightower assumed that regulators must have set a safe level for blood mercury, but that's where things got complicated. The Food and Drug Administration (FDA) said that 200 micrograms per liter was safe, but the U.S. Environmental Protection Agency recommended 5 mcg/l. That meant a 132- pound woman could safely eat 28 6-ounce cans of chunk light tuna per week under the FDA standard, but only two-thirds of a can under the EPA limit. Facing divergent standards like this, Hightower took a logical route: she told patients to stop eating fish, which typically cleared up all or most of their symptoms within six months.

Hightower didn't stop there: She talked to ABC's 20/20 show, published articles on fish consumption and mercury poisoning symptoms in her patients, and tried to find out why regulators were all over the map on mercury hazards. This book is the result, and it turns up some truly weird ideas about mercury and human health.

Hightower reviews the history of medical attitudes towards mercury, which doctors long saw as a sort of cure-all because of its unique chemical properties. For example, bichloride of mercury was mixed into the walls of Stanford University's Lane Hospital in the 1870s because it was seen as such a good antiseptic (that building is now in a landfill somewhere). She analyzes mercury poisoning episodes in Japan, Canada and Iraq in the 1960s and '70s in an effort to make sense of current policies and regulatory standards. One startling finding is that FDA's position on safe levels of mercury consumption as of 2000 was based on data from Saddam Hussein's Ba'athist supporters in Iraq, where several thousand people were poisoned by mercury-tainted grain in the early 1970s.

Hightower shows that many prominent researchers on this issue have received funding from the seafood and energy industries, and dissects the California court ruling that canned tuna did not have to carry mercury health warnings under that state's Proposition 65 law. As she makes clear, money and industry pressure have helped to confuse the public about what types and quantities of fish are safe to eat.

The Bush administration's controversial Clean Air Mercury Rule – which would have allowed power plants, the largest domestic sources, to engage in mercury emissions trading – was struck down by courts in 2008, so Congress and EPA will have to start over on regulating these sources in 2009. And as a 2006 Institute of Medicine study concluded, consumers are hearing a lot of uncoordinated and inconsistent advice on seafood and health from government agencies and private groups. In sum, mercury health risks are a big piece of unfinished business awaiting the Obama administration.

As Hightower points out, fish contain omega-3 fatty acids that reduce the risk of heart disease, so balancing benefits and risks from seafood is a complicated mission for consumers – especially when federal agencies still don't have a consistent message on this issue, and FDA does not enforce what Hightower says is an excessively weak standard for mercury levels in fish. The more fish you consume, she writes, the lower contaminants in your diet should be, so consumers need to educate themselves about which species contain the most mercury.

"Even as recently as November 2006, I had a physician in his sixties consult me about his own blood mercury level of 25 mcg/l who knew nothing about any advisory from EPA, FDA . . . or a host of other acronymic agencies," Hightower writes. After a year of controlling his mercury intake, his fatigue, memory loss and tremors had abated. Doctors like Hightower can help patients take the right steps, but better regulations would be much more effective.

Freelancer Jennifer Weeks (jw@jenniferweeks.com) is based in Watertown, Mass.