"Carbon Shock: A Tale of Risk and Calculus on the Front Lines of the Disrupted Global Economy — How Carbon Is Changing the Cost of Everything" 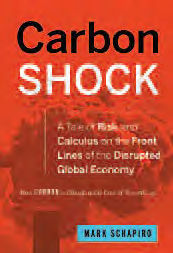 "Carbon Shock: A Tale of Risk and Calculus on the Front Lines of the Disrupted Global Economy — How Carbon Is Changing the Cost of Everything"

Meaningful progress on addressing climate change isn’t just being impeded by those who deny the science behind it.

Perhaps more important are the pragmatists of the business world who, understandably, don’t want to have the issue settled by knee-jerk emotion. They are the slightly more moderate and much more reasonable conservatives who want to be shown on a balance sheet how excessive carbon dioxide emissions are wreaking havoc on the economy and what could best be done, in a logical and systematic way, to scale those emissions back without causing unnecessary hardship.

That’s where veteran journalist Mark Shapiro comes in with his fascinating book, “Carbon Shock: A Tale of Risk and Calculus on the Front Lines of the Disrupted Global Economy – How Carbon Is Changing the Cost of Everything.”

Unlike many books about climate change, this is not a manifesto. There’s a passionate tone in many areas, but the book reads more like an analysis of public policy shortcomings and missed economic opportunities than a tree-hugging rant.

Shapiro does have an agenda – waking people up to the hidden costs of the status quo.

But instead of just promoting efforts to move away from coalfired power plants, he wades deep into the weeds of why utilities should realize that continued investment in them makes less economic sense – especially if the world realizes how a continued overreliance on carbon is driving up the costs of goods, not keeping them suppressed, and how a dreaded carbon tax or even a more flexible cap-and-trade system for emissions may be unavoidable, despite the political fallback.

More importantly, he addresses what economists refer to as opportunity costs – those hidden costs of inaction.

The book begins with an intriguing look at how the carbon footprint of the airlines industry has quietly created a powerful global trade war, accentuating tension on the climate crisis between the United States and Europe.

Then, at various junctures, readers learn how carbon has affected costs for drought-stricken California farmers with higher temperatures and less productive yields; how it has affected prices for crop insurance; and how all of that has resulted in a largely unnoticed – yet hefty – indirect impact on taxpayers.

The successes and failures of addressing carbon are explored in anything from an espresso cup made in South America to foreign polluters investing in trees in the jungles of Brazil. He shows how once-sooty Pittsburgh has become reinvigorated by green technology, and how carbon is being addressed anywhere from China’s power plants to commodity-trading desks in London.

Although there are times the book gets a little too top-heavy in economics, “Carbon Shock” is important because it taps into the market that needs to be engaged more – those who want evidence of what’s at stake beyond altruism or ecology.

Even Robert F. Kennedy, Jr., has stated in numerous speeches, including one to SEJ at the group’s 2004 conference in Pittsburgh, that pollution cannot be addressed without engaging the business community.

Not everyone will agree with Shapiro’s findings – and energy markets change all the time.

But the fundamental effort he made to advance that discussion – the multi-year, excruciating level of research he put in, especially to opportunity costs and lost chances – makes this a noteworthy book.

Shapiro isn’t on a crusade for renewable energy per se, but gives countless examples of how tuning up our approach to energy production, conservation, and energy security – all with the ultimate goal of reducing carbon dioxide and other greenhouse gases – can pay dividends.

Tom Henry is SEJournal’s book editor and is a member of the magazine’s editorial board. He is a former SEJ board member who covers environmental and energy issues for The (Toledo) Blade.