"Fukushima: The Story of a Nuclear Disaster" 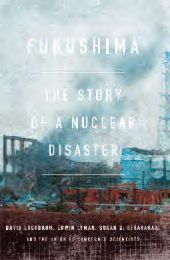 "Fukushima: The Story of a Nuclear Disaster"

First, let’s address the elephant in the room. No, not nuclear power. The Union of Concerned Scientists.

I’ll let the group do its own public relations. But I feel compelled to put this out there, knowing what I do about human nature and how that relates to knee-jerk biases many people have about the controversial, highly politicized subject of nuclear power.

“Fukushima: The Story of a Nuclear Disaster” is a darned good book, regardless whether or not it’s got the UCS brand attached to it. I say that because even though the two UCS employees named as authors – David Lochbaum, a nuclear safety engineer who is director of the UCS nuclear safety project, and Edwin Lyman, a senior scientist for the UCS global security program – have decades of experience as nuclear watchdogs, have given countless hours of expert testimony to Congress and so forth, there’s a segment of the population that will shut down whenever it sees something that appears to have an activist label attached to it.

To each their own. But, in this case – knowing what I do after covering nuclear power for 21 years, one of the longest stretches among active American journalists – I have to hand it to the lead authors, including Susan Q. Stranahan, a Maine writer who was at the center of the Three Mile Island coverage when the once-mighty Philadelphia Inquirer won a Pulitzer Prize for its coverage of the landmark 1979 accident with the Unit 2 reactor there. They not only did their homework, but presented the information in a fair and reasonably balanced manner.

Are there a few nuggets in there the U.S. Nuclear Regulatory Commission and the nuclear industry might take issue with? Perhaps. The tone starts to waver toward the crusading side at times. But, as with all great journalism, the authors shed light on some hard truths.

And, for those eager to dismiss it because of the UCS label, at least consider the fact the authors got a big assist from the NRC itself. I’m not talking about Lochbaum’s brief tenure with the agency, when he worked for about 12 months a few years ago as an NRC trainer. I’m talking about Charles “Call Me Chuck” Casto.

Certainly not a household name, Casto was the point man in Japan for the entire U.S. government for the first 11 months after the Fukushima disaster struck in March 2011. Now retired, Casto came back and oversaw the fleet of U.S. nuclear plants that report to the NRC’s Midwest regional office in the Chicago suburb of Lisle, Ill., for a brief time before ending his agency career. He was, without a doubt, changed by what he saw. Some of that is reflected in this column I wrote for The (Toledo, OH) Blade shortly after he took over as the NRC’s Midwest regional administrator.

Casto’s not a co-author, of course, but he’s mentioned in the credits and, more importantly, his footprint is all over the book. He’s quoted extensively and, at times, the narrative is so compelling (especially in the first chapters) that it seems impossible to have been done without some on-the-ground, personal observations from him or others in Japan.

What fascinated me about this book was, first, the chilling narrative about the Fukushima Daiichi event as it unfolded, in the hours and days leading up to it and nearly a minute-by-minute account as it occurred. Much of it is heavily rooted in public documents, some which were likely hard to get.

The truth is there are a lot of gaps of information about what happened at Fukushima, and that’s largely a result of what happens when tight-lipped industry officials and embarrassed government regulators who claim to have prepared for every conceivable scenario get thrown for a loop with one they didn’t fathom. It happens when it occurs on the other side of the world in a country known for being tight-lipped and while dealing with a language many Americans haven’t learned.

The bottom line is this book does a very good job of journalism, a public service, in reconstructing the events for the American layman as well or better than most of the major media, where staffing cutbacks, a lack of knowledge or appreciation about science (especially nuclear power) and neurotic guessing games over whether the public wants more Lindsay Lohan or serious journalism in the digital age compromised coverage of this historic event.

Of the many take-aways, one stands out: More than a third of all U.S. nuclear reactors are downstream of major dams or bodies of water. Will there be a tsunami here? No, but the point made by the authors is you don’t need one to have flooding that can wreak havoc on a plant and send it spiraling into chaos.

Consider also that the Fukushima Daiichi complex consists of six reactors, three of which melted. Most emergency planning in the United States is focused on scenarios involving one reactor, not multiple events occurring simultaneously in an area where flooding has washed out roads and virtually eliminated access. A lot of planning also depends on backup power from emergency diesel generators.What happens when those are rendered useless by floods?

The book is not an evil scare tactic that UCS critics would suggest. It raises legitimate questions and, in terms of pushing the envelope, that is mostly focused on the NRC’s accountability as a regulator, which is what UCS does more often than pushing an anti-nuke agenda.

Is it completely, 100 percent devoid of emotion and sentimentality? Probably not. But what is? Said Robert J. Rosenthal, Center for Investigative Reporting executive director: “It’s hard to imagine a more comprehensive and compelling account of what happened after an earthquake and tsunami struck the Fukushima Daiichi nuclear power plant in March 2011. There are lessons in this book for all of us.”

Tom Henry is SEJournal’s book editor and is a former SEJ board member. He covers environmental and energy issues, including nuclear power, for The (Toledo) Blade.

* From the quarterly newsletter SEJournal, Summer 2014. Each new issue of SEJournal is available to members and subscribers only; find subscription information here or learn how to join SEJ. Past issues are archived for the public here.