"Island on Fire: The Extraordinary Story of a Forgotten Volcano That Changed the World" 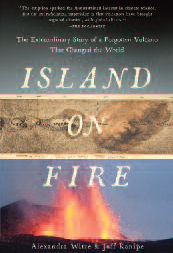 "Island on Fire: The Extraordinary Story of a Forgotten Volcano That Changed the World"

This tautly written book opens with a basic premise: Can a single volcanic explosion change the course of history?

“Island on Fire: The Extraordinary Story of a Forgotten Volcano That Changed the World” brings us to that intersection of natural science and human history with a fascinating, up-close look at a 1783 eruption most of us have never heard about at an Icelandic super volcano called Laki near a mountain called Baroarbunga.

To many of us, these are just unusual words from one of the most unusual places on Earth. Iceland is a place many of us will never see and rarely hear mentioned or read about in news reports.Yet it is an incredible, complex place for geologists, an island with many volcanoes — some which could have the potential for spewing what Laki did someday.

It is the largely unknown contributions that volcanoes have made to climate change, not only above Earth’s surface but also below the sea, that drew me to this book (not to mention my budding fascination with Iceland and the Arctic in general, as well as Antarctica).

Ask yourself the last time Laki’s 1783 eruption factored in today’s climate discussion or even a brief summary of Earth’s climate history. But if we journalists are truly going to attempt to understand climate as a global phenomenon, we all need to learn more about the contributions from remote regions as well as their amazing history.

In the case of that 1783 eruption from Laki, an estimated 9,000 people in Iceland died. But that heavy toll doesn’t account for years of climate disruption, famine and disease that followed in that and other parts of the world.

Laki’s eruption, the authors state, is one of history’s great untold natural disasters — in no small part because of where the evolution of journalism itself was back then.

The authors contend we’ve now learned the eruption wasn’t just about the ash, lava and fog. It was also about poisonous gases blamed for longstanding impacts as far away as Europe and Africa.

With a lack of photographs and other visuals from that era, the writing — of course — needs to step up and be as descriptive as it can, and that’s what happens in this book.

There are only 204 pages of text, but much of the research is amazing and is deftly woven into a strong narrative. The result is a book that is steeped in science, but also history and the stories of people affected by a little-known landmark event.

One author, Alexandra Witze, is an award-winning science journalist and correspondent based in Boulder, Colo. She has written for the journal Nature and has traveled from the North Pole to the jungles of Guatemala to China’s earthquake-ravaged Sichuan province to report on a number of environmental issues.

The other, Jeff Kanipe, is an experienced science writer and the author of a number of astronomy books. Believe it or not, he has an asteroid (84447 Jeffkanipe) named after him.

With their dogged reporting and skillful presentation about the 1783 eruption from Laki and the potential impact of volcanoes in general on Earth’s system, the two of them have – in the words of Scientific American – helped close an important knowledge gap.

Tom Henry has been a journalist for 34 years, the past 22 at The (Toledo) Blade. He has been associated with SEJ since 1994, is a former board member and has been SEJournal’s book editor since 2011. He is the chair of SEJ’s book award category for the third time in 2015.