"Future Arctic: Field Notes from a World on the Edge" 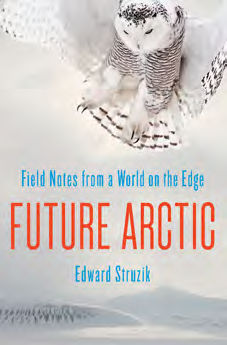 "Future Arctic: Field Notes from a World on the Edge"

The Arctic has a stark beauty. I fell in love with its treeless tundra in 2008, when my newspaper sent me to Greenland for 10 days to research what ultimately became a four-day, nine-story series. I found people there to be sweet and hardy, living on a landscape that is biologically complex and amazing.

A lot has been written about the region, which, as most people know, has long shown more obvious symptoms of climate change than what’s been seen in other parts of the world.

But now we’re taken there again by Alberta-based Edward Struzik, an award-winning writer-photographer-explorer and a fellow in the School of Policy Studies at Queen’s University in Kingston, Canada, whose taut overview, “Future Arctic: Field Notes from a World on the Edge,” deftly hits the nexus of science and politics.

Struzik gives a largely unemotional, straightforward assessment of the challenges the Arctic faces and what’s at stake as various nations struggle to gain a foothold, suggesting the politics of the Arctic are becoming almost as complicated as its science.

He offers glimpses into rich cultures and traditions of Inuit communities, as well as the region’s biological and historical roots. He shines light on the region’s vibrant life, giving the Arctic better treatment than that of a stereotyped, desolate wasteland.

Struzik also shows the region’s wild nature, from getting caught up in a cyclone to surviving a peregrine falcon attack.

His tale is a noteworthy one, being from a writer who has covered Arctic issues more than 35 years, including 30 years of covering polar bears.

As he says, the Arctic “isn’t so much a geographical place as it is an idea, a cultural artifact, a metaphor for human perseverance and ingenuity, and a reminder of what we have done to the wilderness down south.”

Struzik offers a grim, yet painfully realistic assessment of what’s at stake through stories of rare plants, caribou and unique people.

The United States, Russia, Canada, Norway and Denmark all belong to the Arctic Council that “loosely oversees the exploitation and conservation of a changing landscape in the polar world,” he writes.

They are in a race to claim a million square miles of the Arctic that belong to no one, with China, Japan, South Korea, Singapore, India and Italy being granted observer status after years of trying to join the council.

“Creating a road map to the future in this part of the world is not going to be easy when three provinces, two territories and the Canadian government are often at odds with one another over energy development, water conservation and environmental protection,” he writes.

“Cultural considerations are also problematic. The history of the Arctic is also one in which Inuit and First Nations interests have played second fiddle to economic, military and sovereignty imperatives.”

Struzik offers some hope, but raises many hard questions worth asking.

Tom Henry is SEJournal book editor, a member of the magazine’s editorial board and a former SEJ board member. He has covered environmental and energy issues at The (Toledo) Blade since 1993.

* From the quarterly news magazine SEJournal, Spring 2016. Each new issue of SEJournal is available to members and subscribers only; find subscription information here or learn how to join SEJ. Past issues are archived for the public here.