Will Midnight Monuments Be Coming in Obama’s Final Days?

TipSheet: Will Midnight Monuments Be Coming in Obama’s Final Days?

President Barack Obama, in an effort to preserve public lands in the face of an oppositional Congress, has used a century-old executive authority several times in recent years. Now, in the waning days of his administration, will he use it again to preserve more?
Obama’s application of Antiquities Act of 1906 would be controversial — Congress members from the rival party have historically raised outcries about last-minute “midnight” actions by lame-duck presidents — but it just might work.
Under the act, signed into law by Theodore Roosevelt, presidents have the authority to create national monuments from public lands to protect important natural, cultural or scientific resources. This unilateral authority differs from the laws for creating national parks or wilderness — conservation categories that require Congressional approval.
During his two administrations, President Obama has created some 23 national monuments, more than any President in history, except possibly Franklin D. Roosevelt. One was the Papahānaumokuākea Marine National Monument in the Pacific. A few of them have been created over significant opposition in the face of deadlock — for example, the Katahdin Woods and Waters National Monument.
With anti-conservation Republicans rising to control the White House as well as Congress, many conservationists are urging Obama to use his Antiquities Act authority a few more times. Here are several of the top candidates to watch for: 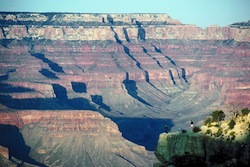 Bears Ears: The Bears Ears are twin buttes near the Four Corners area in southeastern Utah. Proposals to make a national monument on 1.9 million acres surrounding them has a lot of support in Utah, as well as intense opposition. The politics involve tourism, energy companies, tribes and activists.
Gold Butte: It shouldn’t be the issue, but it is. The 350,000-acre federally controlled parcel of Nevada desert just happens to be adjacent to the ranch of the well-armed Bundy family, and has been used by them to graze cattle in defiance of the Bureau of Land Management. Native Americans say the land is theirs and is being vandalized. Some support designation. Advocates of protecting it as a monument include Senate Minority Leader Harry Reid (D-Nev.). The Bundys say that if Obama declares it a monument, they will start another uprising.
Grand Canyon: Some of the Grand Canyon is already preserved as National Park, National Monument, National Forest and tribal land. But ongoing proposals for uranium mining and other development in the lands surrounding it have prompted calls for a new monument declaration to protect another 1.7 million acres in Arizona. There is opposition.
Castner Range: This 7,000-acre surplused artillery range in the Franklin Mountains near El Paso was extolled for its view by Jack Kerouac.
Some other possible monument designations can be found here.
The big question about any lame-duck monument designations is whether they will hold up or whether a new Congress can overturn them — or even any previously designated before Trump was elected. It’s a highly controversial question, much discussed in the media. The partial answer is that nobody knows for sure, because it has never been tested in court, much less decided. Some media coverage of the legal issues here, here, here, and here.