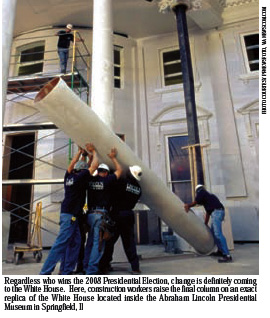 For the first time in decades, energy and the environment are proving to be issues in this fall's Presidential campaign.

"It will be a bigger issue than any time since the 70s," said Kate Sheppard, who writes about politics forGrist. "It can't be avoided this year."

The rise in stature also comes with the pressure to both understand and clearly communicate the environmental platforms of Republican JohnMcCain and Democrat Barack Obama. While both candidates have tried to paint themselves green, several national environmental reporters who have been covering the campaign agree that the two have distinctly different approaches.

"You are seeing these differences starting to emerge," said Margaret Kriz of the National Journal. She said significant philosophical differences exist between the candidates.

Opportunities exist for both national and local environmental reporters in covering this emerging issue during the fall.

Energy and environment issues popped up rather suddenly this summer, after being prettymuch ignored during the primary campaign. Part of the change was precipitated by oil prices that rose duringthe summer toashighas$145abarrel andgasoline thatwasover$4 a gallon at many pumps. McCain quickly took the offensive, suggesting that federal gasoline taxes be suspended and that amoratorium on offshore drilling for oil and natural gas be lifted.

With energy so closely tied these days to climate change, both candidates were also able to better promote their global warming platforms. Again, McCain appeared to be more aggressive and successful in coverage on the issue, in such strategies as calling for building 45 new nuclear power plants across the country by
2030.

Coverage was intense at times, according to a review of the LexisNexis database of major U.S. newspapers and wire services between June 15 and July 15. A search for stories carrying the words McCain, Obama and war produced 2,633 articles published during that time frame. When the word economy was substituted for war, the database reported there were 1,850 stories and for environment there were 840. But when the word energy was used the database produced 1,998 stories.

Reporters agreed there were other reasons the environment and energy were not issues during the primary. Darren Samuelsohn of Greenwire said that as early as January he was reporting that McCain contended he had a stronger environmental platform than Obama. But strong environmental platforms do not play well with Republican voters in Republican primaries and McCain had few incentives to tout those views.

Meanwhile, the Democratic candidates, especially on the issue of climate change, had very few differences even when the race narrowed to Obama and Hillary Clinton.

Historically, Republicans have rarely embraced environmental issues, leaving much of the territory for Democratic candidates. ButMcCain can be different and he has been promoting himself as a Republican preservationist in the spirit of another GOP stalwart, Theodore Roosevelt.

Not everyone is impressed with his environment credentials. The League of ConservationVoters says thatMcCain only voted on what it feltwas the correct environmental approach about 25 percent of the time. In contrast, they giveObama an 86 percent rating. Despite that record, McCain has been sponsoring legislation since 2003 that would control the level of greenhouse gas emissions by the U.S.

Clearly, as many news stories have indicated, the real environmental mark of an Obama or McCain Presidency is likely to be how they deal with climate change. Samuelsohn at Greenwire points out, "This will be the first time a president will be talking about global warming from the Oval Office. And if Obama wins, he will be using his rhetorical skills in a way on this issue that has never been done before."

Both candidates stress a cap-and-trade approach in which the volume of pollution would be limited or capped but companies could buy and sell emission permits. Some stories have suggested that the differences in the two cap-and-trade plans are minimal. Obama wants to reduce emissions by 80 percent below 1990 levels by 2050 while McCain has suggested cutting them by 60 percent. Another difference is that McCain would use market incentives to lower the level of carbon pollutants while Obama wants to use more federal mandates and tax incentives to reach his goal.

Sheppard at Grist says some of these differences are significant and most of the other national environmental reporters interviewed agreed with her. Kriz, in the lead of a June 21 article in National Journal, highlighted that contrast between Obama's federal mandates and McCain's market-based approach.

McCain's selection of Alaska Gov. Sarah Palin as his running mate, and her carefully worded comments about climate change, opened new opportunities for reporters to explore the issue.

Other related issues also reveal differences. For instance, while McCain has called for more nuclear plants, he has not been as clear about what to do with the high-level waste they will produce. Obama has focused more on the waste issue, while being more vague about his thoughts on the future of nuclear generation.

Osha Gray Davidson, a freelance writer based in Phoenix, said reporters should also look at how the candidates stand on renewable energy. McCain's platform states that he believes in tax credits for renewable energy. Yet Davidson said he has been tracking federal legislation on tax credits for solar energy, which has failed in seven different votes this year, some by margins as thin as one vote. McCain missed all seven while Obama voted yes on five of those occasions.

Davidson said he received varying answers from the McCain camp on the Arizona senator's failures to vote. He said the example illustrates the importance of digging into issues that initially do not appear very promising.

McCain's "position does not seem to be consistent," said Davidson. "He seems to be getting a pass on his environmental credentials."

Obama has also faced some scrutiny already because of his ties to the ethanol industry in his home state of Illinois. Davidson said that Obama's relationship with the big-buck coal industry should be examined further as well.

It is possible that interest in both climate change and energy could decline if prices of oil, and gasoline, continue to plummet this fall. But many reporters believed that the spectacle of motorists paying as much as $80 or $100 at the gasoline pump is now firmly fixed in the minds of most American voters.

While the issue will remain, questions do crop up about how much of the story will be covered by environmental specialists and what types of stories they will produce.

In some respects, reporting on the Internet has made this choice slightly trickier. It is web-based reporters who have been left with tracking the most arcane details on the campaign trail this year and breaking an increasing number of stories before their more high-powered competition.

Sheppard at Grist said that this "rapid-response" reporting style has become important to her online employer and occupies much of her time. This is increasing the pressure on everyone who works on time-sensitive deadline and making it harder to dig for more comprehensive stories.

But at the same time, the Internet is also providing an increasing amount of information, not only in the form of news stories but documents and briefing papers, that makes it easier for reporters.

Dina Cappiello, who recently joined The Associated Press, said that the campaign reporters at the wire service usually get first crack at the breaking news. But she also anticipated that she would be involved both in the daily coverage and more comprehensive stories.

Despite the increased attention at the national level, reporters agreed there were still numerous opportunities for local beat reporters.

Or find an important local issue, said Kriz of the National Journal. The candidates may not have taken a stand on the preservation of a local wetlands or the cleanup of a toxic waste site, but local people tied to the campaign may have. How do those positions contrast with those of the candidates, and what is the fate of the local issue if McCain or Obama get elected?

For instance, when McCain earlier this year campaigned in Florida he toured the Everglades and vowed to help restore area wetlands. Local reporters responded by asking McCain why he had voted against a $2 billion appropriation for the Everglades. Climate change is so big, added Samuelsohn, it can be localized in many ways, including by making it a campaign story. How will a local area fare if McCain or Obama are able to implement their global warming policies?

Local and national reporters will also have to decide what is important to pursue and what is not. During the primary both Clinton and Obama stressed that they were purchasing carbon offsets to compensate for the amount of air travel. Even before the political conventions began this summer, both political parties were promoting the amount of recycled paper and other environmentally friendly measures they were engaged in.

Journalists interviewed disagreed on whether these stories were valid insights into the campaigns or just political fluff. Regardless of the answer, the issue does highlight the importance of finding the best stories at a time when interest in energy and the environment has rarely been higher.

— Bob Wyss is an associate professor of journalism at the University of Connecticut and the author of a new environmental journalism textbook, Covering the Environment, How JournalistsWork the Green Beat.