When Mute Swans Become a Menace, What Should Be Done? 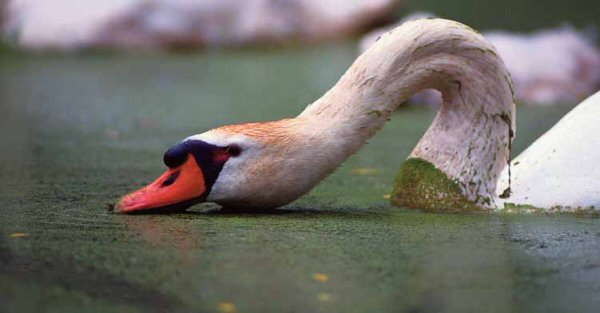 Mute Swans retain a mythic grip on people, touching the hearts of those who glimpse these graceful white birds gliding across a misty lake. Yet many now regard Mute Swans as unwanted invaders that trash fragile wetland and aquatic habitat and chase out other birds.

This dichotomy confounds wetlands managers, who want at least to control growing populations of Mute Swans, if not eliminate them entirely.

"They are a beautiful form of biological pollution," said Jonathan McKnight, associate director for habitat conservation at Maryland's Department of Natural Resources.

Conservation organizations, including the Audubon Society, are united in supporting Mute Swan control. Meanwhile, animal welfare groups and others defend the birds.

Mute Swans aren't actually mute, but they don't honk the way other swans, such as the Trumpeter and Tundra swans, do. They snort, hiss and yap to communicate with one another and other species. A really angry Mute Swan can make a shrill trumpeting cry when the occasion demands.

To feed, Mute Swans poke their heads underwater to eat submerged aquatic vegetation. Each adult eats around eight pounds of plant matter a day and uproots an additional 20 pounds or so.

In some places, they have devastated eelgrass beds and disrupted habitat for fish, shellfish and macroinvertebrates in shallow water. In places like the Chesapeake Bay, they crowd out other birds, notably Black Skimmers and Least Terns. In other locations, they impact Black Ducks, Canvasbacks and Redheads.

Mute Swans are native to Europe and Asia, and have been semi-domesticated in some places. In England, for example, all swans have belonged to the Crown for hundreds of years, with all associated pomp and ceremony attaching to annual events such as the Swan Upping on the Thames.

Most ornithological researchers discount claims that the species has any native presence in North America. But Mute Swans' advocates say the issue is not yet resolved.

For instance, Kathryn Burton, who has established the organization Save Our Mute Swans, contends that as a migratory bird, Mute Swans have a natural presence in North America. A 16th century Colonial painting and a reference by John James Audubon to the possibility of more than two species of native swans are additional evidence.

In contrast, advocates for reducing Mute Swan populations cite Audubon's silence on the particulars of swans other than Trumpeter and Tundra as evidence that they are not native. I was unable to substantiate claims that swans of any kind were raised commercially in the 19th century.

What is undisputed is that Mute Swans were imported to decorate the estates of the wealthy from the late 19th century on, and occasional escapees took up residence in the surrounding countryside. They reproduced successfully, but populations remained small.

Mute Swan numbers began increasing rapidly when lead shot was banned. Efforts to reduce lead shot in Maryland began in the 1970s and a federal ban was adopted in 1991.

As shallow water feeders, Mute Swans scoop up plenty of mud containing small pellets discharged from hunters' shotguns. Wildlife biologists believe that lead, a toxic metal, may have limited the population of swans in past years. Scientists who followed swans before and after the lead shot ban found that the level of the metal in the birds' blood fell. Swans with less lead in their bodies apparently raised more cygnets to adulthood.

The population grew from less than 1,000 in the 1950s to more than 14,000 in 2002 along the Atlantic Flyway. Swans increased most in Ontario, Canada, and in Massachusetts, Rhode Island, Connecticut, New York, New Jersey, Pennsylvania and the Chesapeake Bay states of Maryland and Virginia. In 1999, the Chesapeake Bay hosted more than 4,000 swans.

Egg addling was tried as a means of reducing the numbers of Mute Swans. To do this, workers search out nests. They shake or coat eggs with oil — or do both — so the eggs won't hatch. Then the eggs are returned to the nest. Simply removing eggs doesn't work, because the swans may lay more.

Addling of eggs curbed the growth in the population, but it didn't reduce the number of Mute Swans. "We needed population reduction," said McKnight. Wildlife managers determined that killing them is the most effective way to control the population.

But a public hunting season for Mute Swans hasn't been established. Doing so would raise the chances that hunters would shoot similar but federally protected Trumpeter and Tundra swans. Individual property owners, though, can seek special permits for hunting Mute Swans if they are having a problem with particular individuals.

The typical problem that leads an owner to apply for a permit is swans acting aggressively in a boating area. They defend large nesting territories and can be formidable opponents. Mute Swans are the largest flying birds, with males reaching weights over 35 lbs., females around 20 lbs., as much as five feet long from bill to tail, with a wingspan of four to five feet. Aggressive Mute Swans can pose a threat to public safety — reports document that the birds have broken people's arms and legs.

"We get a fair amount of complaints from kayakers," said McKnight.

Legal protection for these birds has shifted over the years. Once, they were protected by the Migratory Bird Treaty Act. But the Fish and Wildlife Service in 2005 removed that protection, saying the Mute Swan is not native and its "presence in the United States and its territories is solely the result of intentional or unintentional human-assisted introductions."

Maryland's legislature passed a law providing for lethal control of Mute Swans in 2001. The state formed a 12-member Mute Swan Advisory Committee. A majority of that panel recommended the state's Department of Natural Resources (DNR) reduce populations of the species to "as low a level as can be achieved."

But two members, John W. Grandy, representing the Humane Society, and E. Joseph Lamp, of the Maryland Wildlife Advisory Commission, issued a separate report, refuting the charges that Mute Swans were responsible for loss of submerged vegetation and destruction of shallow water habitat. They concede that Mute Swans are not native to the state. But they advocated for maintaining a population of fewer than 500 swans, rather than exterminating them.

"For years, Md. DNR has wrongly vilified these beautiful, majestic birds, and as a result, thousands of them have suffered and paid the ultimate price for the misdeeds of industries that dump tons of pollutants into the Bay every year," said the report from Grandy and Lamp.

Nonetheless, Maryland has reduced its Mute Swan population from 2,198 in 2005 to less than 500 today. Maryland's Department of Natural Resources relies on the American Veterinary Medical Association's Guidelines for Humane Euthanasia for methods — shooting and neck dislocation — that wildlife professionals employ to dispatch swans.

Under council's management plan Mute Swans in the flyway were reduced by 27 percent from 2005 levels by 2008. Rhode Island cut its Mute Swan population over that period, from 1,246 to 856. Virginia lowered its by more than half, 725 to 323, and New Jersey, from 1,890 to 1,253. Mute swans declined or increased slightly in other Atlantic Flyway states.

The public relations of eliminating beautiful, inspiring birds are daunting. "It's a fiery issue," McKnight said.

"It's a beautiful species, and people like to see them," McKnight said. "But they are an ecological liability for the Chesapeake. If we are going to restore and conserve places and the species that go with them, we have to get serious about managing them."

Christine Heinrichs usually writes about domestic poultry, but she stretched her wings to include a chapter on Swans in her recent book, How to Raise Poultry, Voyageur Press, 2009. She lives on California's Central Coast, where she's more likely to see pelicans and gulls.