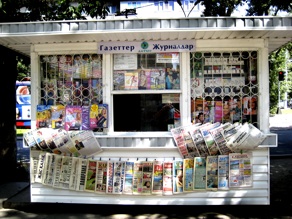 Despite many newspapers and magazines at this kiosk in Almaty, they have little or no environmental coverage.

Getting the climate change story right Kyrgyzstan and Kazakhstan confront serious environmental problems, yet in-depth environmental journalism is scarce. Problems in these two Central Asian countries include inadequate water for irrigation; soil erosion, degradation and contamination; toxic dumpsites holding mining and radioactive wastes; disruption of fragile ecosystems; deforestation; unsustainable agricultural practices; conflicts between biodiversity protection and local interests; and inadequate monitoring of environmental impacts on public health. Lakes Issyk-Kul and Balkhash and the Aral and Caspian seas are in jeopardy from such things as pesticide runoff, oil drilling and overfishing.

Interviews with journalists and press experts, environmental NGO activists and policy analysts in both countries show: environmental topics are not a top priority among media managers and owners; journalists receive little training and journalism students receive no coursework on how to fairly and accurately report on such issues; and stories that do appear usually lack depth, insight, context and analysis

Press rights are restricted, and both authoritarian governments are frequently criticized for strict constraints on the media. Dramatically underscoring the precarious situation is the 2007 unsolved murder in Kyrgyzstan of journalist Alisher Saipov, who had reported courageously about human rights issues. In Kazakhstan, the disappearance of investigative journalist Oralgaisha Omarshanova in 2007 has been attributed to her anti-corruption articles for the independent weekly Zakon i Pravosudiye (Law and Justice). Both crimes remain unsolved.

Ecological problems have created economic, political, diplomatic, security and health threats for both countries and their neighbors. Yet if an independent press cannot or doesn't report about such issues, the public can't pressure government, which then feels less impetus to respond. Also, to report with fairness, balance and accuracy, journalists must obtain information from multiple, diverse sources in the environmental movement and from independent experts, not merely rely on government officials. Thus it is meaningful to examine how journalists cover the environment and how environmental groups attempt to influence or shape that coverage.

Here's what I found:

Environmental problems receive inadequate press coverage, both in the number and frequency of stories and in their depth.

Journalists who cover the environment full-time are nonexistent in Kyrgyzstan and virtually nonexistent in Kazakhstan. At Kyrgyzstan's largest newspaper, the reporter who writes most about environment covers other issues as well. Most coverage is episodic, driven by events—disasters, crises or sensationalism— with little context or analysis. Journalists lack the time, resources and editors' interest to do follow-up reporting with deeper perspective. A multinational NGO executive in Almaty complained about "the lack of analytical information," saying the press provides "just an emotional description of what was happening, and didn't ask experts and scientists." The coordinator of an environmental Web site funded by international donors says, "The weakness is that there is no strict, direct, environmental journalism because journalists are writing from event to event or sensation or scandal."

There are several principal reasons:

• Difficult access to information and comments from public officials and bureaucrats. Interviewees cite deliberate obstruction, coupled with a reluctance or refusal to be quoted, as well as denial of requests for reports and formal statements. A Bishkek journalist acknowledges "Getting access is difficult. That's normal all across the region anytime you talk about a sensitive issue, given the track record of government officials." Environmental NGO activists cite similar problems: One in Kazakhstan notes: "Access to information from government? This is not a tragedy. This is a law of life. We are very far from the democracy people are talking about."

• Difficulty in obtaining information and analysis from independent experts, due in part to their scarcity — many having emigrated — and reluctance of many who remain to antagonize powerful interests. A TV journalist interested in air pollution says, "There are no alternative specialists who can do research and have special equipment to measure poison in the air and compare it with statistics from the state. Because there are no such experts, we have to rely on the state."

• Few truly independent domestic media exist. Those that aren't state-owned generally are owned or controlled by friends, relatives and allies of the regimes, by opposition parties, by individual politicians or by well-heeled business owners, and don't report impartially on environmental issues. An international NGO executive says, "Their understanding of `independence' is `write whatever the customer demands.'"

• Most media owners put low priority on environmental coverage, allocating little space or airtime except for crises. Career advancement comes with covering economics, international relations and politics, not environment. A media consultant in Kyrgyzstan says, "Even if there is an ecological accident that would interest local media, there would not be strong in-depth analysis in the story for a simple reason: that's not demanded by editorial offices."

• News organizations lack financial and staff resources for comprehensive coverage. The Kyrgyzstan country director of Internews noted that regional TV stations with limited budgets and "trying to make a living" can't afford to travel outside their locales. And a TV editor in Bishkek says his station can't afford to rent a helicopter to cover the impact of global warming on mountainous Kyrgyzstan's glaciers.

• Universities don't teach environmental journalism. While there are some NGO-sponsored trainings, most professionals lack substantive knowledge and practical skills to competently tackle such complex issues as nuclear waste disposal, desertification and climate change. A Talas journalist says journalists have difficulty understanding environmental problems and terminology: "They can't do analytical work, just reporting, because of a lack of professional skills."

• A perception—true or not—is that the public is disinterested in environmental issues, except problems in their immediate area. An independent radio journalist observes that while "a small group" of activists might press government to act on a problem, "most of the population doesn't know the current situation on environmental issues and don't want to know."

• Overall, weak relationships and a lack of trust exist between NGOs and journalists, although relations may be stronger at the local than national level. As the head of one news service said, many NGOs in repressive societies aren't eager to publicize their actions and lack the capacity to work with the press. Reasons include: fear of antagonizing authorities and irritating donors; limited finances; failure to collaborate with each other; and lack of public relations training.

• The practice of "envelope journalism"— bribery—deters activist organizations from seeking coverage and impedes their ability to compete for media attention with well-heeled business interests. A journalist in Kyrgyzstan says the problem has worsened because of hard economic times: "It's increasingly difficult to talk about standards and ethics if there's no way of implementing that."

In addition, failure to report accurately and insightfully impedes building of public trust in the press and reinforces longstanding beliefs that the press is a biased tool of the regime, the regime's rivals or other influential interests. At the same time, aggressive reporting can have a positive impact. For example, a Naryn journalist described how his coverage of a Chinese-owned mining company's illegal cutting of trees led the Kyrgyz government to deny it an operating license, and his articles about overfishing in Lake Son-Kol led to a two-year fishing ban.

Pulitzer Prize-winner Eric Freedman is an associate professor of journalism and assistant dean of international studies & programs at Michigan State University, where he is associated with the Knight Center for Environmental Journalism.