Between the Lines: As Rules Change for Journalists, Room Remains for Determined Voice

Between the Lines: As Rules Change for Journalists, Room Remains for Determined Voice

For the latest installment of SEJournal’s author Q & A, Calgary-based energy writer Andrew Nikiforuk discusses his latest book, “Slick Water: Fracking and One Insider’s Stand Against the World’s Most Powerful Industry,” with SEJournal book editor Tom Henry. It follows a seven-year saga of Alberta-based biologist Jessica Ernst, a longtime oil patch consultant-turned-whistleblower. “Slick Water” won honorable mention in SEJ’s 2016 Rachel Carson Environment Book Award contest. Judges described it as “hard-nosed, gutty investigative journalism by a real pro. … a beautifully written narrative and fiercely determined voice” and a great follow-up to Nikiforuk’s 2009 book, “Tar Sands: Dirty Oil and the Future of a Continent.” That book made Nikiforuk the first Canadian to win SEJ’s Rachel Carson Environment Book Award when he took top honors that year. He has been writing books since 1991. 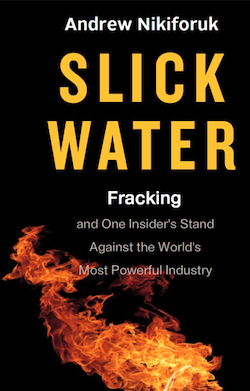 SEJournal: Both “Slick Water” and “Tar Sands” deal with extraction of fossil fuels used to produce energy, including natural gas and a heavy crude used to make gasoline. What similarities and differences did you come across in how you did your research?

Andrew Nikiforuk: The two books are radically different. “Tar Sands” was an angry polemic about the impacts of rapid bitumen development in Alberta, Canada, and its politics. In contrast, “Slick Water” is about one landowner and her amazing case against regulatory negligence: It is pure, hard-nails investigative journalism.

But both books are grounded in a thorough knowledge of the industry’s complicated science and economics all gained over two decades of reporting. It is never enough to know just the tip of an energy iceberg. As a reporter, you must know what is underneath the water.

SEJournal: The main subject of “Slick Water,” Jessica Ernst, has a compelling story and your book eloquently focused on it to tell the broader story of fracking. Yet many stories about energy and the environment have people with amazing stories. As a writer, how do you know when it’s best to tell a story through someone’s eyes instead of a more general narrative with various anecdotes sprinkled in?

Nikiforuk: Over the years, intuition becomes the best guide on when to focus on people. The best stories always focus on people because people open the doors for readers. Reporters can write reams of material on why Norway pursued a different path with its oil and has a fund for the future. Or they can tell the story of Farouk al-Kasim. The Iraqi engineer married a Norwegian girl. To get better medical care for a child with cerebral palsy they moved to Oslo just before the North Sea oil boom took off. Norway had no experience with oil and so the government hired Kasim for advice. He became the architect of a different oil experience: Go slow and save the money. I know which story I’d want to read.

‘Does the world really need a book on this subject?’

SEJournal: What did you find most challenging about the research and writing process of “Slick Water”? At what point did it dawn on you that you have a powerful book?

Nikiforuk: The most challenging aspect was confirming and documenting how the Alberta government, a classic petro state, broke its own laws, falsified data, slandered citizens and committed fraud. When I started to add up the sheer scale of injustices thrown at just one citizen seeking accountability, I knew I had a universal and powerful story.

SEJournal: What advice do you have for would-be writers who think they have their arms around a subject but still aren’t sure if they have enough for a book?

Nikiforuk: Never rush into a story. Listen to the central characters. Weigh the evidence. And then ask yourself, “Does the world really need a book on this subject?”

SEJournal: You’ve been writing about the oil and gas industry for two decades from out in Western Canada. What observations can you make about the industry itself during the time you’ve been covering — especially after the modern era of fracking, when the game-changing horizontal drilling technique began? And have you noticed any differences in how the industry behaves in Western Canada compared to other parts of North America, such as the Great Lakes region or Louisiana and other parts of the Gulf Coast?

Nikiforuk: The industry is pretty uniform in its behavior because the industry’s regulators are largely captured. There isn’t much difference between the Texas Railroad Commission and the Alberta Energy Regulator. They are staffed by oilmen, and they facilitate oil and gas extraction at the expense of communities, agriculture and other resources such as groundwater. As energy resources become more extreme — and fracked oil and gas disrupts and unsettles rural communities on a radically different scale than conventional hydrocarbons — industry has lobbied for more deregulation and got it, especially in Canada.

SEJournal: Do you consider yourself an activist-author at this point in your career? Or just author? Is there anything wrong with authors being involved with activism, to the extent writers such as Naomi Klein are?

Nikiforuk: I’ve never considered myself an activist-author. I’m a reporter first, and often an outspoken landowner second. I don’t even call myself an environmentalist because most environmental groups are too urban and secular to really understand rural people and their concerns.

The experience of owning land in the oil patch in southern Alberta has obviously informed and colored my stories. After meeting the social critic Wendell Berry years ago for a magazine profile, I decided that I needed to find some greater meaning and purpose to what I do. And so I consciously made a decision to give voice to people on the frontier of resource abuse: rural landowners in Western Canada and the United States.

The world needs Bill McKibbens and Naomi Kleins, but that’s not what I do.

Reporting on a ‘collapsing political system’

When I started to add up the

sheer scale of injustices thrown at

I knew I had a universal and powerful story.

Nikiforuk: The publishing industry has shrunk, just like the troubled trade of journalism. Two of my publishers have gone bankrupt, and most everyone I know in journalism has been forced into retirement or left the trade.

We live in revolutionary times. In a failing economic system, the survival of publishing and journalism that actually adds value to a community and its democratic life is no longer assured. Medieval forms of communication and news spreading will likely replace the rotting systems now in place. And if you want to report or write a book, you will likely need a noble financial mentor.

SEJournal: From a Canadian writer’s perspective, what intrigues and bothers you about our president? Any comparisons to how Donald Trump and former Canadian Prime Minister Stephen Harper approach science?

Nikiforuk: The election of President Trump is a symptom of a greater problem. And that problem has as many heads as a Hydra. It includes rising economic inequality, the failure of public institutions to uphold the law, rampant economic stagnation, declining energy returns, polarized politics among the nation’s elites and the growth of complex disruptive technologies that create more problems for ordinary people than they solve.

Trump is a symptom of a failing system or an empire that has peaked. I grew up in the States, and I’m deeply disturbed by the revolutionary rhetoric of the right. This is not just an American problem either. Political extremism is growing in Russia, Europe and Canada as those societies grapple with declining economies, rising unemployment and energy descents.

Harper was really an alt-right figure before the term was born. He did to Canada what Trump is now doing to the United States. What has surprised many Canadians is that Trudeau really doesn’t represent a departure from the Harper years but has behaved like a milder continuation. Once you have crossed this line into extreme and dysfunctional politics, there is really no turning back.

SEJournal: Are there lessons American journalists in the Trump era can glean from Chris Turner’s book of a few years ago, “The War on Science: Muzzled Scientists and Willful Blindness in Stephen Harper’s Canada”? How should U.S.and Canadian journalists handle the Trump administration, especially when Trump tweets that journalists are “enemies of the state” and is now trying to dismantle our U.S. Environmental Protection Agency, accommodate the oil and gas industry and roll back efforts to combat climate change?

Nikiforuk: I recently wrote about the attack on science for the Bulletin of Atomic Scientists and I invite readers to check it out. But for journalists the rules have all changed and so has the game. How does one report on a collapsing political system?

I think Wendell Berry summed it up best. He noted that much protest misses the point. Sure, it releases a lot of anger or strives for some kind of political response. But in this hour of the day, most protest is not going to roll back science cuts or put a new face in the White House. Berry wrote that “Protest that endures, I think, is moved by a hope far more modest than that of public success: namely, the hope of preserving qualities in one’s own heart and spirit that would be destroyed by acquiescence.”