Pick up your badge and conference materials here. If you didn't sign up for the Thursday tours, Friday evening party at Carrie Furnaces or Sunday breakfast at Phipps Conservatory, there might still be room. Check with registration and sign up there.

Sign up here for Saturday mini-tours and beat dinners. Read up on Board candidates, find information about SEJ Award winners, membership and services.

Tours in the Field

Advance registration is required for all Thursday tours. Attendance on each tour is strictly limited, so registering early is important. Departure times vary (see below). For those looking for some exercise, tours 1, 2 and 6 are your best options. Other tours involve moderate exercise. Tours 4 and 5 are best suited for those with limited mobility.

Buses will stage and depart from just outside the Benedum Room on the first floor of the Wyndham Grand Hotel Downtown. Watch for directional signs and pointers to get you there. A cash-and-carry breakfast kiosk will be available in the Benedum Room.

Some tours might be able to take standby passengers. To go standby, report to registration 20 minutes before the scheduled tour departure time and have your tour fee available. Standby passengers will be admitted on a first-come first-served basis after those already on a wait list.

Buses will return to the Wyndham Grand around 5:00 p.m. for a night of wining and dining by hosts of independent receptions. You'll find hors d'oeuvres, drinks, press kits, chats with environmental experts, good cheer and great networking.

Pennsylvania’s only national forest is also one of the nation’s most industrial and threatened. It was established in 1923 on 513,000 acres of mostly clear-cut land, and grew, along with its black cherry, oak, maple and beech, into one of the few national forests that makes money on its timber sales. The mineral rights under more than 90 percent of the forest are privately owned (the legal term is “split estate”) and oil and gas drilling sites are almost as plentiful as the white-tailed deer. Wilderness designated acreage is among the lowest in any of the nation’s forests, and its trees are beset by a host of invasive bugs and blights. Despite all that, the forest is bounded by two federal Wild & Scenic rivers, has a section of the North Country National Scenic Trail and more old-growth acreage than anyplace in the state. We’ll hike about a mile through an old-growth section called Hearts Content and discuss the forest’s many issues. Total drive time – 6 hours. Coverage.

What happens on the land impacts the water, even drinking water resources as vast as Lake Erie. We’ll explore those impacts on a tour of the eastern Ohio Lake Erie coastline, stopping first at the historic Lake Erie harbor of Ashtabula, Ohio, where a $75 million project to remove toxic PCBs from the river is nearing completion. Next we’ll head to the lakeside 1919 Ashtabula Pavilion for an early lunch and a discussion with Ohio Sea Grant about Lake Erie’s toxic algae and fisheries challenges. Then it’s off to the North Kingsville Sand Barrens for a short hike with the Cleveland Museum of Natural History, where we’ll spot fall migratory birds and learn about land and lake conservation efforts. Finally, we’ll stop at a winery near Conneaut for a discussion of a unique freshwater wind turbine project in Lake Erie, and sample bread, cheese and wine at this 50-year-old sustainable vineyard (please bring $5 cash for wine tasting). Total drive time – 4 hours. Coverage.

Out of the tragedies of 9/11, a fallow coalfield in western Pennsylvania became the site of the Flight 93 National Memorial. The built structures of the memorial echo aspects of the natural surroundings, while native trees and wildflowers and a renewal of wildlife at the site create a space for remembrance and healing. We’ll explore themes of reclamation and restoration, as legacy acid mine drainage is still being treated on the grounds. A county away, we’ll visit Frank Lloyd Wright’s 1937 masterpiece, Fallingwater, for another perspective on the integration of the built environment and nature. Total drive time – 4 hours. Coverage.

4. “Cracker” Plants and Fracking and All That Gas

Of all 50 states in the U.S., Pennsylvania is the second largest producer of natural gas behind Texas. On this tour, we’ll visit drilled wells from the historic past, a fracking site of the present and one of the biggest shale gas industrial sites of the future — a 340-acre polyethylene “cracker” plant. We’ll also meet with local elected officials and residents living in the communities where these operations occur. From Pittsburgh, our bus travels north through the Ohio River Valley to Beaver County, Butler County and beyond. During the trip we’ll view the documentary “Triple Divide [Redacted],” which highlights the impacts of fracking on people and places across Pennsylvania. Total drive time – 5 hours.

5. From Steeltown to Green City

Part of Pittsburgh’s evolution from a city choked by smog and coal dust to one of the nation’s most livable places has been the embrace of green buildings. From non-profit nature centers to for-profit bank buildings, Pittsburgh is lighting the urban sustainability pathway with LEED-certified structures that help clean the air, reduce dependence on fossil fuels and brighten the skyline. But the city and The University of Pittsburgh are also working to make sure that green buildings don’t just go to those with the most “green” to pay. On this tour, local experts will take you through some of the highlights, visiting innovative projects in a low-income neighborhood as well as a city park, Pitt’s campus and the blooming (and green) Phipps Conservatory. Total drive time – 1 hour. Coverage.

Fifty miles southeast of Pittsburgh lies Laurel Caverns, the largest cave system and bat habitat in Pennsylvania. In 2008, white-nose syndrome made its way from New York to Pennsylvania, and by the following year, thousands of bats had died from the fungal disease. On this tour, you’ll travel deep into Laurel Caverns, off the public cave paths and through narrow crawl spaces to hibernacula used by bats during the winter months. You’ll learn about bat physiology, behavior and the effects of white-nose syndrome, as well as the caverns’ dazzling geology. Participation in this field trip requires a high degree of mobility. Total drive time – 3 hours. Coverage.

Pittsburgh faces challenges typical of many urban water systems, with its efforts to stem combined sewer overflows, manage its stormwater, prop up its aging infrastructure and address lead in its drinking water. Amid community outcry, regulators have ordered the water authority to replace lead service lines across the city. Meanwhile, a new “Green First” plan will utilize green infrastructure to address flooding and CSOs. This tour will start with drinking water treatment and make stops at green infrastructure sites and a reclaimed island that boasts, “George Washington landed here.” We’ll tour a sewage treatment plant and end the day on a research boat at the confluence of Pittsburgh’s three rivers, where we’ll learn about emerging pollutants in urban waterways as we take in a stunning view of downtown. Total drive time – less than 2 hours. Coverage. 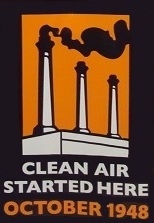 Once known as “Hell with the Lid Off,” the Pittsburgh region is still coping with the environmental legacy of heavy industry. We will hike up “boney piles” (early 20th century coal wastelands) and discuss reclamation efforts, and visit the Smog Museum (motto: “Clean Air Started Here”) in Donora, the site of a 1948 air pollution disaster that killed 22. We’ll be joined by historians, industry experts and a survivor of the deadly Donora smog, and conclude with a discussion at Brew Gentlemen, a microbrewery located in the historic steel town of Braddock. Total drive time – 2.5 hours. Coverage.

9. Fission and Our Energy Future: The View from Inside an Operating Nuclear Plant

Join us as we tour FirstEnergy Corp’s twin-reactor Beaver Valley nuclear complex, 34 miles northwest of downtown Pittsburgh, and get a firsthand look at how nuclear technology works. Beaver Valley 1 and Beaver Valley 2 are pressurized water reactors licensed to operate until 2036 and 2047, respectively. But Pennsylvania is one of many states with deregulated electricity markets where nuclear plants now struggle to compete against lower-priced forms of energy. Learn about the pros and cons of nuclear, and why industry executives view it as a powerful tool for combatting climate change. Total drive time – 1.5 hours. Coverage.

The UPitt bookstore is on site to sell SEJ members' and speakers' books, as well as offering environmental books handpicked for the SEJ conference. Stop by for book signings from 8:00 - 9:00 p.m.

Now a popular SEJ tradition, this is the conference’s best networking opportunity. After spending the day in the field, meet with hosts of multiple receptions. They’ll have experts on hand as well as displays, materials and, of course, great food and drink. And don’t miss the sneak peek at 2017 exhibitors and alternative vehicles. After the receptions, we'll have live music by the Blues Orphans from 9:00 to 11:00 p.m.