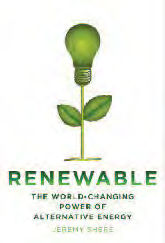 Reading Jeremy Shere’s “Renewable: The World-Changing Power of Alternative Energy,” you can’t help but think – lament, even regret – what might have been.

If only President Lincoln had taxed kerosene as much as alcohol during the Civil War, our cars might run on biofuels today.

If only Henry Ford, decades later, had succeeded in promoting the plant-based fuels, climate change might not be as big a problem.

At various points in history, renewables have been the best option, only to be set back by shifting politics or global economics. Now, with climate change and waning supplies of fossil fuels, renewables stand to dominate again.

But are they ready?

Shere sets out to answer that question. He comes at it from a personal perspective, feeling both like he ought to partake – buy a hybrid car, for instance – and that he lacks a good understanding of where energy comes from and how that might change.

Shere tackles five major categories of alternative energy – biofuels, solar, wind, geothermal and hydro – and offers colorful histories of the development of each.

For wind, he brings us back to 12th century England, where an ambitious knight could find wealth with a wind-powered flourmill.

He writes about “wind wagons” crossing the Great Plains, harebrained ideas to harness the power of Niagara Falls and abandoned plans for a rock-melting, nuclear-powered drill bit.

Shere’s reporting on the current state of renewables gives a good sense of the big picture and also of how specific renewable projects can work.

Mostly the picture is hopeful.

Geothermal power plants north of San Francisco have operated economically at utility scale since 1960. Wind power ballooned from 6,000 megawatts of installed capacity in 1996 to 238,000 megawatts in 2011.

Ball State University in Indiana replaced its old coal boilers with a $70 million geothermal system – because it made economic sense.

Shere’s on-the-ground reporting and personal reflections give a rounded picture of renewables that goes beyond dollars and megawatts.

His focus on individual scientists and developers is justified by the outsized role individuals have played in energy development through history.

Shere proves that he’s capable of explaining the technical side of renewables, giving a thorough description of how photovoltaic solar panels are made and explaining the value of cellulosic ethanol. But mostly he avoids the nitty-gritty in an effort, he explains, to avoid losing readers’ attention.

There are times that a more detailed analysis would have helped. For instance, Shere raises, but then skips, questions of integrating wind power into electrical grids or accounting for the energy used to produce biofuels. The reader is almost left not knowing if either technology has any benefit at all.

“Renewable” might have been stronger, too, with a chapter on energy efficiency.

Given the right circumstances, it seems, renewables are technically viable and could flourish. At other times, history suggests renewables are doomed to fail. The inertia of fossil fuels seems hard to overcome.

“So which is it?” Shere asks. “Is solar energy booming, or is it a momentarily sexy but ultimately marginal player in the greater energy scheme?”

Shere’s answer seems to be this: It depends. That might sound frustrating, until you realize there are many ways to judge success or failure.

“Compare the energy output of the world’s solar plants to that of the world’s coal-fired power plants and, yes, solar seems puny,” he writes. “But consider solar technology today in contrast to where it stood only 30 years ago, when Jimmy Carter unveiled his White House solar panels, and a different story takes shape.”

Shere’s conclusions seem justified. He writes that “nearly all” renewable technologies will require government funding and support to thrive.

But he also points out that a simple cost comparison between renewables and fossil fuels “ignores the largely invisible, unaccounted-for costs of fossil fuel-based energy, such as pollution, potential effects of climate change, and myriad tax breaks and other incentives benefitting energy companies.”

He writes that economic and political support would speed the transition to renewables “immeasurably,” and that such a transition is inevitable, if only because fossil fuels will someday run out.

Maybe “Renewable” went to press before Bill McKibben articulated so well in Rolling Stone that if we burn all the already discovered fossil fuels, the planet is toast.

Then again, like a responsible journalist, Shere might just be writing about the world we live in and not the world we might wish to have.

Stefan Milkowski is a freelance writer and carpenter in Fairbanks, AK.