"The Third Plate: Field Notes on the Future of Food" 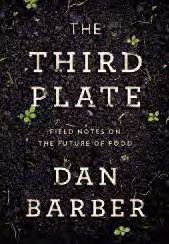 "The Third Plate: Field Notes on the Future of Food"

Dan Barber is a widely lauded chef who has been a leading voice for the farm-to-table movement for more than a decade. In 2004, at the Stone Barns Center for Food and Agriculture in Pocantico, NY, Barber opened Blue Hill, a restaurant that showcases meat and produce raised on site and locally.

But Barber begins “The Third Plate” with a surprising assertion: Although the farm-to-table message has helped educate Americans about the negative impacts of our industrial food system, it has not changed that system in any meaningful way.

For decades, the typical American meal was what Barber calls “the first plate”: a hefty portion of meat or fish and a small side of vegetables or grains. Farm-to-table eating has created “the second plate,” which substitutes local, sustainably raised meat and produce for mass-produced versions.

It’s more flavorful. But in Barber’s view it “allows, even celebrates, a kind of cherry-picking of ingredients that are often ecologically demanding and expensive to grow.” We still make farmers grow what we want to eat, instead of eating things that can be grown without damaging the land.

Barber wants to shift Americans to a “third plate,” a different way of eating. The third plate focuses on what the land can provide, uses entire animals and fish instead of a few choice cuts, and does not deplete soil or remove nutrients from food.

An example might be a carrot dish with a sauce made from shredded beef, using one of the rough but flavorful cuts that many restaurants throw away.

To illustrate his idea of a third plate, Barber visits food producers who raise delicious food through methods that preserve soil and water, yielding tasty products and healthy ecosystems.

In the dehesa system of south and central Spain, for example, farmers graze livestock on pasturelands studded with oak trees. Pigs fatten on acorns from the oak trees in fall, yielding jamon iberico, one of the choicest types of ham in the world. The oaks also yield cork for wine bottles, and farmers make cheese from sheep’s milk and butcher cattle for beef. No single product is farmed for maximum yield in the style of large-scale U.S. agriculture, but the system provides a range of products and healthy land.

Barber is honest about the role that chefs play in promoting unsustainable ideas about food. “We’ve helped shape American cuisine, particularly when it comes to eating meat, by putting center cuts at center stage,” he writes.

In one scene, Barber visits a cutting-edge restaurant where the chef receives a freshly-plucked chicken from a farming cooperative in France, lauds the flavor, then laments, “What the hell am I going to do with an entire chicken?”

“The Third Plate” does not offer easy blueprints for overhauling America’s food system, although readers can pull out some first steps – for example, turning away from meat-centric meals and using more grains and legumes.

Barber’s field trips unfold at a leisurely pace (the book clocks in at 447 pages), but his stories are worth the time and effort – much like the foods that Barber says we should be eating.

Jennifer Weeks is a freelance writer and former SEJ board member based in Watertown, Mass.

* From the quarterly newsletter SEJournal, Fall 2014. Each new issue of SEJournal is available to members and subscribers only; find subscription information here or learn how to join SEJ. Past issues are archived for the public here.