"The Melting World: A Journey Across America’s Vanishing Glaciers" 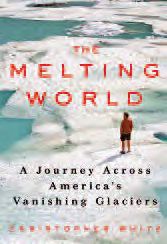 "The Melting World: A Journey Across America’s Vanishing Glaciers"

SEJ member Christopher White’s “The Melting World: A Journey Across America’s Vanishing Glaciers” feels kind of like a 2014 version of Elizabeth Kolbert’s classic “Field Notes from a Catastrophe,” written in 2006 – except that White’s book was produced years later and is focused on Montana-area mountain climbers. White puts readers there, with descriptive, eloquent writing that gets them as close as the writing can to feeling the ice blocks and hearing them pop.

White, who lives in New Mexico and is a frequent National Geographic contributor, spent five years in the field with Dan Fagre, a climate scientist and ecologist, starting in 2008.

Told through Fagre’s eyes, White offers a story that is part adventure tale and part sounding board for climate change issues impacting the globe.

He chooses to explain the all-encompassing story through a single ecosystem and a portrait of a compelling, determined researcher and his support team.

There are, of course, other parts of the world with stories to tell – some even more dramatic – and there are countless other researchers doing rugged and important field research. But White effectively penetrates the issue and brings it home through his skilled narrative and look at the future of the American Rockies – the center of which is Glacier National Park, which is down to 25 of what used to be 150 glaciers. And those may be gone a little more than a decade from now, making Montana the first state to suffer the extinction of its mountain glaciers.

One reviewer compares White’s prose to that of John McPhee and Norman Maclean. To whatever degree that comparison is relevant, the point needs to be underscored that this book is a good example of telling stories that need to be told to help bring home the far-reaching, nebulous issue of climate change.

Tom Henry is SEJournal’s book editor and a member of the magazine’s editorial board. He covers environmental and energy issues for The (Toledo) Blade.

* From the quarterly newsletter SEJournal, Fall 2014. Each new issue of SEJournal is available to members and subscribers only; find subscription information here or learn how to join SEJ. Past issues are archived for the public here.