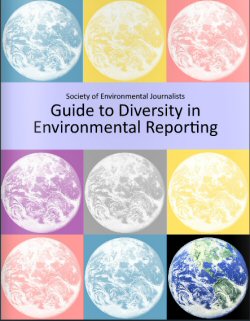 In some ways the environmental movement grew out of the civil-rights movement, and African-American publications beat the mainstream media to the environment story in the 1960s and ’70s. Yet more than a generation later, despite newsrooms’ avowed intent that America’s diversity be reflected in their hiring, the number of non-whites in newspaper newsrooms has stagnated for about a decade at around 12 percent. Similarly, a study last year by the National Association of Black Journalists found that only 12 percent of newsroom managerial positions were filled by people of color at stations owned by 20 major media companies.

Are you and your news outlet reflecting the true diversity of your community? These are hard discussions, but environmental journalists should be having them.

And an important tool to prod those discussions is SEJ’s new Guide to Diversity in Environmental Reporting, which I was honored to co-author with Talli Nauman.

Diversity reporting means encompassing economic, social, ethnic, geographic and other perspectives often excluded, or whose roles are not fully explored. A lot of that involves looking closely at ourselves as products of our environments. It is also about exploring tools, locales, sources, frames and histories we have missed, ignored or misunderstood.

Hopefully that’s the fun part. Our guide book focuses on reporting so as to be action- oriented, although some of our contributors and I would argue that a more systemic look at environmental journalism is crucial to fully addressing the issue. That said, we had to start somewhere. Here is a snapshot of some of the most important lessons I hope readers will take from the guide.

Environmental justice is particularly important to this discussion because it has produced some of the most vociferous arguments for diversity and inclusion in environmental matters.

The U.S. Environmental Protection Agency defines environmental justice as “the fair treatment and meaningful involvement of all people regardless of race, color, sex, national origin or income with respect to the development, implementation and enforcement of environmental laws, regulations and policies.”

Yet there are numerous definitions from many perspectives. Some emphasize resource allocation or focus on access. Others are concerned with humans alone, while still others include all species. What’s more, activism to foster environmental justice is usually bound up with movements for social, economic and racial justice.

Why does this matter for journalism? All of these efforts leave us with a great deal of documentation that can help us understand the history of diversity and inclusion as it relates to the environment. We also have living, breathing sources who can help us understand data and phenomena in important and possibly unexpected ways.

Deal with data The guide has several resources that can help round out more inclusive reporting with hard data. Among them is TOXMAP, a geographic information system from the National Library of Medicine. It uses maps of the United States to help users visually explore data from the Toxics Release Inventory and Superfund programs.

TOXMAP lets you see overlays of map data about diversity, such as U.S. Census information, income figures from the Bureau of Economic Analysis, and health data from the National Cancer Institute and the National Center for Health Statistics.

Another tool, EJView, allows journalists to create maps and generate detailed reports based on geographic areas and data sets. EJView offers data on factors that may affect human and environmental health within a community or region, including demographic, health, environmental and facility-level statistics.

Focusing on diversity and inclusion in environmental reporting means checking and re-checking the contexts in which we work and the methods we use. At the center is an awareness of our own predilections, and of the resources available for fostering change.

Studies have shown that ethnic media cover environmental issues differently than mainstream media in the same community. So, keeping up with ethnic, subculture, foreign language and other niche news media as part of the mix of tracking a beat is one way to keep abreast of perspectives that are not represented in the mainstream, or not represented in sufficient depth.

To find sources with intimate knowledge of environmental issues, it may be necessary to look beyond the usual environmental organizations. Research has shown that minority environmental activism often looks fundamentally different from that of mainstream, conventional or more well-established groups.

For instance, black environmental activists may be more likely to consider their work as relating to social issues, and so do not label it as “environmental.” Journalists who are aware of this can avoid missing significant news, opportunities or sources. Maybe it’s a church meeting, not the Sierra Club meeting, which will find you the best source.

Social media can be an excellent resource if used thoughtfully. For instance, using Twitter to follow people across a range of ages, races, ethnicities, geographies, abilities and sexual orientations can give insights into how they engage with environmental issues and what unique knowledge they have to offer.

The very best intentions do us no good without thoughtful examination of our own tendencies to exclude. This is true for individuals and our organizations. SEJ’s diversity guide discusses comfort zones, and the newsroom itself can be a powerful one. The 2013 newsroom census by the American Society of News Editors showed that diversity in newsrooms has remained stagnant at about 12 to 13 percent for more than a decade, even as the country’s racial makeup changes significantly. In short, we need to try much harder.

When efforts to diversify do occur, too often they are unidirectional. Organizations tend to invite a small number of outsiders to own territory, rather than venturing out to see what there is to learn. A constant exchange of ideas, talents and understanding among groups with equal say in the conversation is necessary.

As we journalists aim for objectivity, we must acknowledge how truly subjective our views are. Reaching out early and often to diverse groups is one of the best ways to make sure we are doing our best to include diverse perspectives that truly reflect our communities.

Jennifer Oladipo is editor and co-author, with Talli Nauman, of SEJ’s Guide to Diversity in Environmental Reporting. She is senior business writer at the Upstate Business Journal in Greenville, S.C., where she covers business, energy, sustainability, environment. She has covered environment for the past seven years, winning an award for continuing coverage of water issues from the Society of Professional Journalists’ Louisville chapter. Her writing has appeared in Orion Magazine and Grist.com. The SEJ guide is available free in digital form or for $7 for a printed version here or here.

* From the quarterly newsletter SEJournal, Fall 2013. Each new issue of SEJournal is available to members and subscribers only; find subscription information here or learn how to join SEJ. Past issues are archived for the public here.