Tale of a Seattle River Engages Public In Pollution 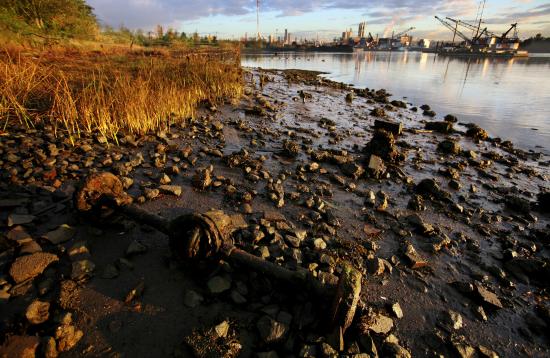 Debris near a Seattle park where a salt marsh is being restored — only about 2 percent of the original Duwamish River estuary remains.

When the U.S. Environmental Protection Agency in 2000 declared Seattle's Duwamish River riddled with enough pollution to be considered a Superfund site, the Seattle Post-Intelligencer carried a splashy story. Then, as happens at many news outlets, we kept the story mostly on the back burner. Don't make that mistake.

We decided seven years later to check back in on the river's cleanup. Our series broadened public interest, bringing a standing- room crowd to a public hearing the day after our series concluded. People really care about these sites if they're well-informed.

And don't think you must cover your local Superfund sites in a massive project, either. The stories we turned up could have easily been rolled out as worthwhile weekenders over the course of months or years. Among our stories:

• The four biggest polluters of the river directly disobeyed EPA orders in drafting a key document that would help govern the amount of cleanup cash that ultimately would be required. They estimated seafood consumption rates based on an Indian tribe that does not fish the river, and eats much less seafood than the tribes that do fish there. Lesson: Pay attention to routes of human exposure to toxic materials.

• EPA had just one civil investigator to track down polluters and make them pay for the cleanup – for all of Region 10. With help from a handful of EPA contractors, she was responsible – theoretically, at least – for tracking down hundreds of firms that had operated at the Duwamish plus "potentially responsible parties" at 98 other Superfund sites in the region. Lesson: Ask about staffing, particularly this function of making polluters rather than the public pay for cleanup.

• Even though officials had spent $70 million so far, they remain unable to pinpoint the source of a ubiquitous class of contaminants called phthalates (THAL-ates) Lesson: Ask about potential recontamination; in this case the vehicle is stormwater runoff.

• Debate on the cleanup was shaping up so that local governments and The Boeing Co. seemed likely to advocate a cleanup level that would rule out any subsistence fishing. But tribes and environmentalists were pushing for a higher cleanup level.

Lesson:Ask about the ultimate cleanup goals; are they in dispute? Are they adequate to protect public health and the environment?

• Our series wrapped up with a look at a whistleblower from a second Superfund site, adjacent to the Duwamish, who had been railroaded out of his job as a result of reporting danger to cleanup workers. Lesson: Don't forget to look for the compelling human stories.

One thing I wish we'd done better was to convey just how difficult it is for poorly funded government officials to keep up with the demands the process places on them. (For more on the series see www.seattlepi.com/specials/duwamish.)

The Duwamish is a little unusual for a Superfund site. It's a big section of a river that runs through a broad swath of southern Seattle. So it has the potential to affect many people.

Many Superfund sites are more compact, and pose a risk for fewer people. However, those people tend to be the poor, and often are racial minorities. Remember we are obligated to be watchdogs especially on behalf of those folks. And I'm pretty sure you'll produce some compelling journalism along the way.