Getting Started With Some New Skills: Producing Podcasts 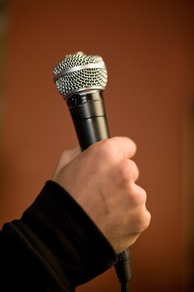 Just being a great writer is no longer all you need in order to make a living as a freelancer these days.

The market is flooded with newly unemployed journalists — you might be one of them — and it's becoming really hard to make your work stand out. So maybe you think that by producing a podcast to go with your writing, you can have something unique to offer your editor.

A podcast is an RSS feed for audio or video. It's a way to syndicate such material for distribution to portable audio players, such as the IPod, from which podcasting takes its name. People sign up for your podcast, and whenever a new program is produced it is sent automatically to their computers.

And if you really think producing a podcast is the answer to your freelance needs, let me give you one word of advice — don't. There, I've said it. Right now, there are thousands of podcasts in the world, more than 95% of which are produced by people with really nothing to say. So why add to that clutter?

Besides, producing a podcast isn't as easy as it sounds. It requires a learning curve that takes something in short supply for most freelancers — time.

You can still look to audio as a way to make your offerings stand out. But start small. Using a couple of fairly inexpensive pieces of equipment, you can record broadcast-quality interviews and natural sounds. Either of these can make a nice addition to your freelance offerings, with much less to learn before you can get started.

The equipment needs are minimal — a recorder, a microphone and a computer powerful enough to run an audio editing program. Here's how to get started.

Journalism 2.0
First, you need to read up on what's happening in the world of digital media. I know, there's barely time to eat anymore and sleep is out of the question, but take a few minutes to learn about where our profession is heading. A good start is Journalism 2.0 — How to Survive and Thrive, produced by the Knight Citizen News Network. Be sure to read the chapter on digital audio. The book is available for free download here.

Hardware
Your computer needs to be powerful enough to run audio editing software, and have a big enough hard drive to work with audio files, which can become rather large — each minute of a mono audio recording in WAV format (more on that in a moment) requires about 5mb of computer space. So an hour interview will require about 300mb of space. Most relatively new computers should be able to handle these needs.

Audio can be recorded and saved in many formats, from MP3 to WAV files. You don't need to know what all of this means— you just need a recorder that can record and transfer WAV files to your computer. WAV files are considered broadcast quality, and that's what you want. While your final product will likely end up as an MP3, you want your source files to be the best quality possible, and that's WAV.

While some small digital voice recorders (DVRs) such as the Olympus DM-20 can record in WAV format, I would suggest you purchase a small flash card recorder. They are simple to use, relatively inexpensive, and easy to find.

Every day there seems to be a new flash card recorder out on the market. Here are a couple of incomplete, but fairly substantive recorder comparison charts, with links to reviews:

While not all flash recorders are equal, pretty much any of them today will do all that you will need as a beginner. SEJ owns ten Marantz PMD 620s. These machines were used to record all the audio from the SEJ conference in Roanoke (listen to some on the SEJ website). The Marantz is available here.

The Olympus LS-10 also has had several great reviews.

All three machines come with their own microphones (the Marantz and Olympus microphones are internal to the machine, while the Microtrack microphone plugs in externally), so they can record some basic audio without any additional equipment needed.

Eventually, though, you may want to get a good external microphone. When you're ready, read about microphone pickup patterns, and then pick the best microphone type for your needs.

The Shure SM58 ($99) and the Electrovoice 635A ($99- $130) are broadcast standards, so tough you can pound nails with them (really). Both are omni-directional (did you read about pickup patterns yet?) and great for general interviewing. For noisier locations, and good sound isolation, consider a small shotgun microphone. These are unidirectional (another pick-up pattern) and are quite versatile. Here's one example.

There are many stores that offer both audio recorders and microphones. I've had the best luck on prices and service with BSW.

Some gear can also be found inexpensively at Amazon.com. Be sure to shop around, though, because prices vary widely between suppliers.

Software
A decade ago it took a $50,000 studio to produce truly professional audio. Today, many software packages under $400 can do everything that a studio could and more, all on your laptop. There are even free programs that will easily do everything you will want to do with your audio.

Most of these programs are no more difficult to use than Microsoft Word. In fact, some of the conventions are the same across platforms — in most audio programs, Control-C will copy a section of audio, Control-V will paste that audio elsewhere, and Control-X will delete a segment — just as they do with text in a Word file. So don't be surprised when you quickly feel comfortable moving audio around your computer.

Here are reviews of some of the more well-known audio editing programs.

Audacity is a free, open-source audio editing program. It's easy to use, and well-supported by the open-source community. It can be downloaded here.

For Mac users, there is Garage Band. I've never used it, but I've been told it's quite simple to use as well.

Finally, once you are done with your recording and editing, you'll want to send it off. Several websites allow the transfer of large files. I use www.yousendit.com, but you can find many other sites that will do just as good a job.

It really is that easy. Changing technology has removed the hard stuff involved in working with audio. Any well-trained monkey can now do it. What's left is the creativity you bring to your work. So go out there, be creative, and start winning those new contracts. Then get some sleep — you deserve it.

Dale Willman is the executive editor of Field Notes Productions. He provides training for journalists internationally and speaks widely on media issues.