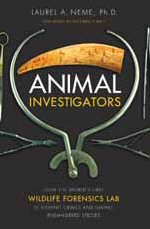 The CSI shows on TV brought human forensic science into the living room. Laurel Neme dissects the world of wildlife CSI, with a modus operandi more professional than the glitz of an entertainment series. She illustrates the scientific precision required with true-crime accounts from the underworld of wildlife trafficking.

Neme's focus is the work done at the U.S. Fish & Wildlife Service Forensics Laboratory in Ashland, Oregon, the only one of its kind in the country. The lab opened its doors in 1989, after years of political wrangling.

Having a facility for wildlife crimes is critical for several reasons. Wildlife forensics would never get priority in labs doing human forensics work, which are already so overwhelmed that testing of human crime scene materials lags years behind. Also, the requirements of wildlife crimes are quite different from those of human crimes. In human crimes, investigators at least know what species they are working with and that the violence that killed them is a crime. In the case of wildlife crimes, the victims show up as carved figurines, purses, shawls, powdered medicine or, in the case of caviar, food. Some wildlife trade is legal, so making a verifiable determination of what species was killed to make the product, where and when are crucial to the legal process of charging a crime.

That's the task the lab took on: establishing the protocols and data that meet legal standards to give law enforcement the facts to determine what laws have been broken. In the case of wildlife, the date when a species was listed may determine whether the product violates the law. Nabbing a poacher for hunting out of season is one thing. Making a case against organized wildlife traffickers — whose business is estimated at as much as $20 billion annually, equaling or exceeding the legal trade — requires more sophistication.

Neme's book follows various wildlife species through the lab processes used to help law enforcement officers solve crimes and convict the guilty: Alaskan walrus, North American and Asian bears, and South American birds. Working at the leading edge of wildlife crime forensics, the lab and its scientists had to develop and refine the methods they use to bolster criminal cases.

The book's depiction of the lab's walrus investigation reveals a complex case that required its scientists to figure out whether the animals died naturally or were killed, and if the latter, whether they were killed legally by subsistence hunters. The researchers not only faced scientific problems, but also the social and political difficulties of Alaskan natives whose subsistence hunting was in question. Not an enviable position to be in. Neme teases out the strands of logic and lab work that eventually established ways to tell a walrus that was legally hunted for subsistence from the many which were illegally taken for their ivory. The disgusting field work on decomposing walruses ultimately allowed the investigators to identify the bleached condition of cervical bones as a marker of illegal hunting.

The lab's investigation of illegal sales of bear bile, in demand as medicine in Asian communities, raised other challenges. Crystallized bear bile sells for over $1,000 a gram, about 20 times the price of heroin. But it turns out many of the alleged bear bile products are made of pig bile, which when purchased from pig processing plants is completely legal. It's beyond law enforcement to pursue fraud against someone selling fake bear bile and it complicates prosecution of actual bear crimes. In this case, the lab's work established that no wildlife crime had been committed. This buttressed the lab's reputation for impartiality and strict science, increasing the weight of its testimony for future prosecutions. In nine out of ten cases, Neme writes, defense attorneys don't bother challenging the lab's results.

The existence of bear bile farms had somehow escaped my attention before reading this book. How much worse does it get? The bears face truly horrible conditions and the excess quantities of bear bile produced at the farms have inspired merchants to add it to personal care products, beyond its traditional use for the most severe illnesses. "Rather than dying to cure human diseases, bears are now being killed for garish consumer products for the wealthy," Neme writes.

Neme follows the twists and turns of an illegal trafficker in South American bird feathers to some dismaying end purchasers, including a Dickinson University anthropology professor, art gallery owners, lawyers and the secretary of the Smithsonian Institution. Demand for the feathers also encourages native peoples to make items of cultural significance purely for the trade, debasing their cultural meaning and corroding tribal life, she writes. But too often, low priority is given to wildlife crimes worldwide, making them easy to get away with and highly profitable. The professor, zoo director, art gallery owners and lawyers got off with fines and forfeiture of the artifacts. The Smithsonian secretary pleaded out to a single misdemeanor violation of the Migratory Bird Treaty Act, for which he paid no fine. He was placed on probation for two years and sentenced to 100 hours of community service. The trafficker was sentenced to 40 months in jail. He escaped after serving 24 months and remains at large.

The Oregon lab plays an important role in fighting wildlife crimes, but Neme says the proactive way to save endangered wildlife is to nip illegal sales and curtail consumer demand. "Rather than concentrating on catching sturgeon poachers, who operate in remote locales and are easily replaced by others, agents pursue illegal caviar traders who are the real motivation behind the illegal killing," she writes. "When consumers' tastes change they can reduce demand and shift a product toward substitutes." Acceptance of alternative ingredients also could help stop the illegal trade. Neme points out that the products sold as rare animal parts typically only contain minute concentrations. For example, the federal lab in Oregon has shown that less than 0.5 percent of the medicines that claim to contain deer musk actually do. Edgard Espinoza, the lab's deputy director, says the percentage of actual rare animal ingredients could be even less for tiger bone and rhino horn, used to counter male impotence. It makes one wonder if Viagra might inadvertently be the savior of wildlife, Neme writes.

Christine Heinrichs writes about domestic poultry and other sustainable agriculture issues. Her second book on raising traditional breeds in small flocks, How to Raise Poultry, was published by Voyageur Press in March 2009. She lives in Cambria, California where she hopes the killing of three elephant seals on the beach in 2008 will some day be solved.

** From the quarterly SEJournal Fall 2009 issue.