The Art of the Essay for Science and Environment Writers

Freelance Files: The Art of the Essay for Science and Environment Writers

When I set out to write an essay handbook for science and environmental writers, the first problem I ran into is that no one is quite sure how to define an essay. Aldous Huxley wrote that the essay is “a literary device for saying almost everything about almost anything.” Mathematician and science writer Martin Gardner wrote that it has “irresponsible boundaries.” 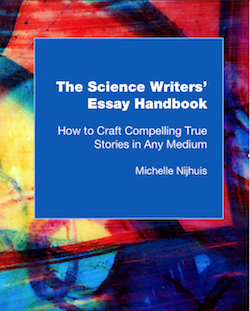 Here’s the working definition I came up with: Essays aren’t straight news, and they aren’t diatribes or rants. They are written in a personal voice, involve one or more journeys, and are relevant not just to the writer but also to the reader.

Those last three characteristics mean that essays are perfectly suited to the digital age — and to science and environmental writing, too.

For instance, the use of a personal voice — not just in stories published under the “essay” label, but in blog posts, feature stories and multimedia packages — allows writers to go beyond the simple translation of scientific results, providing the context and analysis so valuable to modern readers.

By the same token, the physical and emotional journeys that are typical of essays can mirror a journey of scientific discovery or environmental exploration.

And a sense of broader relevance, whether implied or explicit, helps those busy, distracted modern readers make it to the end of any story.

So no matter what kind of environmental or science storyteller you happen to be, essay-writing skills can be an extremely useful addition to your toolbox.

Starting with a question

For me, essays usually begin with a “turning in my head,” a persistent question that sets me off on a journey of discovery. That journey — physical, emotional, intellectual or some combination thereof — often becomes the structure of the essay.

While I researched and wrote these essays, the questions I started with became broader questions about the influence of experience on expectations and the role of government in innovation — questions I hope were relevant not just to me, but to my readers, too.

Begin with a persistent question

that sets you off

on a journey of discovery

The screenwriter John Yorke argues that almost every story can be divided into three major acts: In Act 1, the protagonist enters or is thrust into a new world; in Act 2, the protagonist struggles against an antagonist or opposing force; in Act 3, the protagonist integrates old and new.

In most essays, the writer functions as the protagonist, and his or her journey follows this standard three-part structure. In essays, I’ve found, there’s a twist: Instead of Darth Vader or the Joker or a murderous stepfather, the essayist grapples with an existing story — either a literal tale or some sort of assumption. Instead of returning from his or her journey with a lightsaber or the One Ring, the protagonist of an essay comes back with a new “story” — a new way of seeing the world.

This twist is most obvious in purely critical essays, where the writer analyzes a constructed story such as a movie or a play. But it’s true in every essay I can think of. In “How to Stop a Tsunami in Three Easy Steps,” an essay from the web site The Last Word on Nothing, Heather Abel dispels the story that children react to fear in simple, predictable ways. In “Archimedes in the Fence,” also from The Last Word on Nothing, Stephen Ornes finds mathematical elegance in an insect that’s usually seen as a backyard pest.

So when you set out to write an essay — or a blog post, or a feature, or any other kind of story — identify your triggering question, and the existing story that will serve as your “antagonist.” As you seek answers to your question through research, interviews and reflection, a new story may unfold.

An essay by any other name

When you’re looking for places to publish essays, be sure to look beyond the “essay” departments of major magazines: It’s possible to publish essays, or stories with essay characteristics, in almost any publication operating today.

The New York Times, the Washington Post and many smaller newspapers have burgeoning opinion sections, and most of their opinion pieces are structured and written as essays. Many digital-only publications are hungry for first-person accounts, especially experiences that are tied to current news. Though magazine features usually do more “showing” than the typical essay (which tends to rely on “telling”), they often use a personal voice and follow a journey structure.

Essay and opinion editors typically want to see a full draft of a piece, not just a pitch, before giving a definite answer. That’s because the success of an essay depends so heavily on its voice and execution. Some editors, however, may be open to discussing the prospects of a potential essay before you write it — I know I am. Just ask and find out.

Essays, unfortunately, tend to pay less than reported features, even though essays often require substantial reporting. But because the line between essays and features is so fuzzy, an idea that starts out as an essay might turn into a story that can be pitched as a feature with a strong personal voice.

Do remember that essays need to be just as accurate as any other piece of nonfiction (if you’re recalling personal experiences and are uncertain about the accuracy of your memory, simply acknowledge that in the text).

Treat your sources with the same respect you would treat any other sources, even if — or especially if — they’re friends or members of your family. If possible, tell them about what you’re writing before you publish and give them a chance to respond: it may result in an uncomfortable conversation, but it’s the right thing to do (unlike conventional sources, your friends and relatives weren’t aware that their words and actions were on the record), and hearing a different perspective may well help you write a better, more complex essay.

Finally, if you happen to be writing about a difficult personal experience, treat yourself with respect, too. Even if there’s an attractive byline on offer, consider both the short-term and long-term consequences of making your experience public, and if you move forward, make sure you have the resources needed to deal with any possible consequences — the publication you’re working with may back you up, but don’t assume it will. Sharing your own stories can be a powerful way to help others, but do it on your terms.

Michelle Nijhuis is the author of “The Science Writers’ Essay Handbook: How to Craft Compelling True Stories in Any Medium.” Her essays about science and the environment appear in The New Yorker’s Elements blog, the group science blog The Last Word on Nothing and elsewhere. She also edits essays for High Country News, and welcomes submissions from SEJ members at michelle at hcn dot org. This article is adapted from a piece previously published on The Open Notebook.