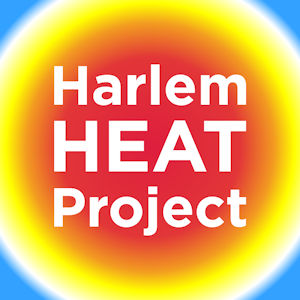 JULY 6, NEW YORK, NY — A pioneering news initiative this summer will bring together a unique team of non-profit journalism and community partners to investigate how summer heat affects the health of residents of the Harlem section of Manhattan and explore ways to build community resilience.

The Harlem Heat Project will use heat-and-humidity sensors to capture hard-to-access indoor air conditions with the help of a crew of community-based citizen scientists. These “ambassadors” will also gather updates about residents via a mobile app. Reporters will document the process and the results in multiple installments over the summer.

More people die of extreme heat in this country every year than in hurricanes and other natural disasters combined. Many heat-death victims are elderly and poor, and their deaths occur behind closed doors, out of the view of public agencies and the media.

“Our main aim is to cast light on the health risks of urban heat, and show how it’s affecting residents, while involving the community in the journalistic process,” explained AdaptNY Editor Adam Glenn, who is overseeing the project.

Added WNYC Senior Editor Matthew Schuerman, one of the team’s leaders, “The Harlem Heat Project will be one important way to get into those hot stuffy rooms where that population lives, document the dangers they face through crowd-sourced data, and identify ways to reduce the risks.”

Project partners hope that the summer project, if successful, may serve as a model solution for one of the most vexing public health threats of our time: how to monitor the heat that vulnerable residents are experiencing inside their homes, and when to intervene to save their lives.

Beginning in July, the team will place the first of what will ultimately be up to 60 inexpensive sensors in Harlem residences that lack air conditioning, in order to continuously monitor indoor conditions during the hottest part of summer. Some of the sensors will even have the ability to send text alerts when the indoor temperature reaches a dangerous level.

Citizen-scientists in the community will be trained in how to use the sensors to capture and upload sensor data from smartphones, as well as how to watch for and respond to signs of heat stress as they talk to vulnerable neighbors during regular sensor site visits.

The heat and humidity sensor is being developed and prototyped by WNYC’s Data News Editor John Keefe.

“We’re using do-it-yourself hobby electronics, and documenting our process along the way, so that anyone could replicate this project in their own community,” Keefe said.

Real-time data from the sensors will be charted and shared online at WNYC and partner sites,

along with explanations of the dangers posed at various thresholds. The team will also analyze whether temperatures indoors are warmer or cooler than outdoor temperatures to better understand the heat island effect, in which cities are often significantly warmer than surrounding areas.

From July through September, the news partners will present reports on the project’s findings. One of the key questions the project is looking to answer is just how hot it gets inside typical Harlem apartments that lack air conditioning. The project will also provide a window into the lives of community members, offering stories and profiles of residents. And additional reporting is planned on related topics, such as the dangers of heat, ways to keep cool, and options to strengthen community resilience to heat.

The project expects to gather insights directly from the citizen science ambassadors and participating community members through a new phone app developed by iSeeChange and NASA. The iSeeChange Tracker app newly released on iTunes, as well as the mobile website, allow community members to contribute directly to the Harlem Heat Project’s urban heat investigation.

“Stories and data are two sides of the same coin, and we need both to guide adaptation  decisions,” says iSeeChange founder Julia Kumari Drapkin. “The iSeeChange Tracker empowers communities to tell their own stories alongside the temperature, carbon dioxide, and weather data each season and to keep their own records of heat impacts.”

As the data-gathering initiative wraps up this fall, the team will draw conclusions from its findings, then once again convene the ambassadors, as well as interested members of the Harlem community and other experts, in a collaborative media-citizen workshop. Participants will brainstorm ideas for combatting heat-related illnesses and deaths that the community, city government and other actors can implement in the future.

“The collaborative workshop is a way of using the reporting project as a lens to view the problems of urban heat islands, community resiliency, environmental health risks and more - then seek out solutions together,” said Glenn, who has run similar workshops for journalists and community members before through AdaptNY.

“WHCR-90.3FM will provide a direct link to seniors in the Harlem community. Some don’t have air conditioners and often sit on sidewalks and stoops to cool off. We hope the project will result in programs that help them stay safe in the heat.” says General Manager Angela Harden.

“We are happy to work with AdaptNY and partners to facilitate community-based reporting on climate change as an alternative to the current model. Too often, the people who are disproportionately impacted by climate change and extreme heat are not getting their voices heard. That has to change,” said WE ACT Director of Communications Brooke Havlik.

The partners are undertaking the Harlem Heat project right at a time when the dangers of global warming are becoming increasingly clear. A recent paper by researchers at Columbia University’s Earth Institute projects that as many as 3,331 New Yorkers could die every summer due to heat exposure in the 2080s depending on the severity of global warming and our ability to adapt.

City College researchers Brian Vant-Hull and Prathap Ramamurthy are acting as informal scientific advisors to the Harlem Heat Project. Vant-Hull, who has conducted city sidewalk heat studies, said the project’s findings would be “very valuable” to the health community because of how little research is available gauging indoor temperatures, such as inside public housing.

From its state-of-the-art studios in New York City, WNYC is reshaping audio for a new generation of listeners, with groundbreaking, innovative radio programs and podcasts that include Radiolab; Freakonomics Radio; On the Media; Here’s the Thing with Alec Baldwin; Death, Sex & Money; and New Tech City, among others. With an urban vibrancy and a global perspective, WNYC is America’s most listened-to public radio station and the home to an award-winning newsroom of 70 journalists. WNYC’s resilience reporting is supported by The Rockefeller Foundation. For more information, go to RockefellerFoundation.org

AdaptNY launched in 2013 to foster community dialogue in New York about how to adapt to the risks of climate change. Support for AdaptNY is provided by the CUNY Graduate School of Journalism. Its work on the Harlem Heat Project is supported by a PSC-CUNY Award, jointly funded by The Professional Staff Congress and The City University of New York.

ISeeChange is empowering communities to observe how weather and climate affect their environment. With support from the Association for Independents in Radio, the Wyncote Foundation and NASA and NOAA, ISeeChange is working nationwide to connect the public with national media and scientists. For more information on ISeeChange community investigations and media partnerships, please visit ISeeChange.org.

WE ACT for Environmental Justice is a Northern Manhattan community-based organization whose mission is to build healthy communities by assuring that low-income and/or people of color participate meaningfully in the creation of sound and fair environmental health and protection policies and practices.

WHCR-FM90.3 is a community radio station broadcasting from the campus of the City College of New York, providing informative, educational and cultural programming to the diverse populations of Harlem, upper Manhattan, and sections of the Bronx, Queens, and New Jersey.