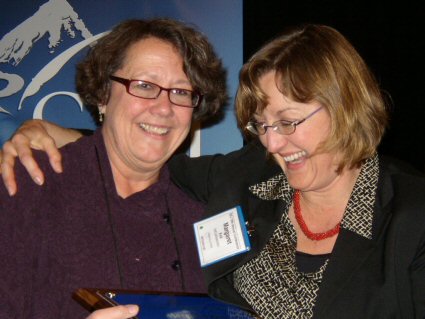 Christy George, SEJ's new president of the board, presents the 2008 Stolberg Award to Margie Kriz (right). Photo by Kate Lutz.

"One of SEJ's most prestigious awards is named for founding member David Stolberg. Every year since 1998, the Stolberg Award has gone to a stalwart SEJ volunteer.

"Our 2008 Stolberg winner has toiled in the SEJ trenches for many years: everything from writing for the SEJournal to serving as an awards judge to being a mentor to helping write the Covering Pollution handbook that SEJ and IRE co-published to organizing numerous conference panels, and often multiple panels at the same conference — including this conference, even though she only got here today. [Saturday, the last full day of the conference.]

"But most of all, she has been our #1 go-to person whenever SEJ wants to talk about environment and politics. Again and again, she's delivered.

"At the Portland conference, during the first year of the Bush administration, she delivered both brand-new EPA Commissioner Christie Todd Whitman and brand-new Interior Department Secretary Gale Norton — and that was just three weeks after 9/11. And they came despite the Secret Service's grave concerns about protestors dressed as caribou.

"This year, she not only helped organize the Roanoke conference's Saturday lunch and plenary session, "Election 2008 and the Environment," but also a presidential primary debate on energy and climate change earlier this year. With that panel, SEJ broke into the National Press Club, and also onto C-Span. That's C-Span 1, not C-Span 3. And they carried it LIVE!